Google unveiled on Wednesday its Google Instant, a search engine display that shows results as you type, even predicting what you want before you’re finished writing .Google is now a step ahead of bing again.
However the instant results are different.
Typing a company name (triad digital) took at google only three letters till the company appeared but 7 letters till the company appeared in bing.

Google says that an average search takes 25 seconds (9 seconds to type, some millisecond till result comes back and up to 15 seconds to scan through the results).

Google Instant, said Mayer, saves an average of two to five seconds per query. Applied to the billions queries Google processes per day, that translates to 350 million hours of users' time per year.

Promoted as "faster than the speed of type," Instant will also be a game-changer for many doing business on the Internet. Google is using new caching systems and JavaScript to help browsers keep up, and displaying relevant research as typed so users can click through content and scroll through predictions. For the last few days, Google has been using bouncy dots and light gray text with cursor to highlight the new service.

Although handy for most people, real-time search results will create a whole new plane for search-engine optimization.
"Google Instant means no one will see the same Web anymore, making optimizing it virtually impossible. Real-time feedback will change and personalize people's search behaviors," says PR pro Steve Rubel, on his blog.

This means that businesses will have to rethink their SEO and Web strategy to work the new system, even if Google states that it won't change its rankings. Google is also trying to reassure advertisers that Instant will improve the "quality" of clicks on ads but promises nothing, saying overall that it may increase or decrease impressions.

Company names would benefit from shorter sobriquets or abbreviations, because if a user can get to Amazon.com in one letter (that's "a,") your business may be best served with as few words or letters as possible. Those companies gifted with only one letter on the stock exchange will also be easily found. That means SEO could rely on letter rankings rather than word rankings in the near future.
The bigger the company is the most likely they appear by typing one letter, like amazon or aol for letter A or Walmart and wachovia for letter W. 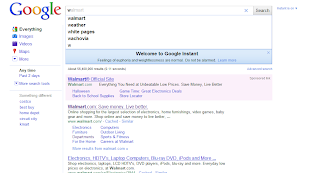 Aside from saving users two to five seconds in search time, Google's search tool may be creating a whole different climate for businesses, especially for those involved in e-commerce and online marketing. Expect to be hearing more as marketing professionals learn the new system and find ways to effectively use SEO. Surprisingly the new search is available on iPad even if google said it will be not available for mobile before November.
The really good part on the instant search is for mobile users, where we have problems to type full queries. The instant search will come handy.
Bing does actually a really good job on the iPhone with their search results and input.

Everybody is now talking how new and genius this instant search is, but we should not forget bing which had it before.