Netflix, Inc., (NASDAQ: NFLX) is an American provider of on-demand internet streaming video in the United States and Canada,[5] and flat rate DVD-by-mail in the United States.[6] The company was established in 1997 and is headquartered in Los Gatos, California. It started its subscription service in 1999[7] and by 2009 it was offering a collection of 100,000 titles on DVD, surpassing 10 million subscribers.[7] On February 25, 2007, Netflix announced the billionth DVD delivery.[8] In April 2011, Netflix announced 23.6 million subscribers.[9] In summer 2011, Netflix announced they will expand into the European market, starting in Spain by 2012.[10] (Wikipedia.org)

Netflix is going to increase the price for their service by 50%.

I have right now the cheapest plan for streaming and DVD delivering to my house. It is $9.99 which included one DVD at the time send to my house and unlimited video streaming and I use both a lot. 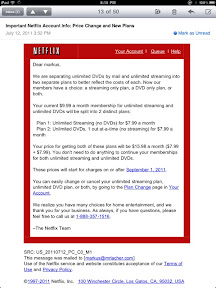 Starting in September I have to make the choice to stream only or to get DVDs only delivered to keep same price or even to be cheaper.

Just streaming does not help me because there a videos we like which are not available for streaming, mostly the new blockbusters or some exotic international videos.

Getting only DVD delivered is not the answer for us neither, because for the $10 I can have only 1 DVD at any given time. Which allows me to watch max 8 videos a month. It takes two days for Netflix to receive the video and two more days till I get a new video to my house.

Not that I am totally upset, the service is still much cheaper than Apple iTunes and has more selections than hulu or Amazon, but I might consider to sign up for amazon prime (which is needed to get unlimited free video streaming).
Prime costs only $79 a year and gives much more than unlimited movies streaming. 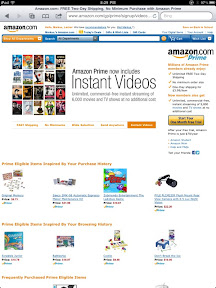 The only problem is that neither my AppleTV nor my xbox 360 can play amazon videos. Of course if I would have a PC (which I don't have, I have only Apple computers) then I could install the amazon unbox player on my PC and then connect the xbox to my PC.

The beauty on Netflix is that it works with all my devices. The AppleTV has Netflix, the xbox has it, i installed the Netflix apps on my iPhone and iPad and of course Netflix works on my Apple computer as well.

It was expected that Netflix will get more expensive, the costs for the rights are getting higher for Netflix in September, when the new contracts with the movie companies come in place. On the the other hand the long tail idea does not work as expected. Usually the idea behind long tail is that Netflix attracts customers with expensive blockbusters but then the consumer will watch most of the videos which are loyalty free or have very low fees for Netflix.

At the same time the costs per customer did grow but 20%.
But the good mews is that the acquisition costs did fall extremely. The average costs per new customer is just a little more than the revenue per customer per month.

Above statistics are from seeking alpha.

Streaming is much cheaper for Netflix than sending DVDs. Of course streaming a lot of data is expensive but having distribution centers is neither cheap and less scalable. But do you know what the postage costs are for Netflix? $0.56 per DVD. In my case I have in average 6 DVD a month, this already $3.36 out of my $9.99 a month plus all other costs the margins are very low for Netflix (in my case).

Netflix will release in the next few weeks their annual numbers, we will see how healthy they are.

I am certain that Netflix wants to get more users to streaming only and eventual move totally from DVDs away.

But two things should happen. First of all Netflix needs to have all their movies as streaming available and second they have to come to a method that we can stream the specials to DVDs as well. The beauty of DVDs is the extra stuff on it, directors cut, interview etc. Apple is partly offering such extras. I bought as download Star Trek and got a bonus to it with interviews etc.

Having all videos as streaming might be very difficult, because international movies might have different streaming rights than sending a DVD. We will see.

I will wait till last second, if I stay with Netflix and choose just one service or if I move to other services. As an example my dish provider is offering more and more videos on demand and many series I watched at Netflix I get free at hulu.

An image from amazon about compatible devices - brands