Steve Jobs did talk at the last developer conference about iCloud and since then iCloud is heavily promoted on the Apple Website. However iCloud is not yet fully rolled out but some features are already available on the iOS devices.

When you open iTunes on your iPhone or ipad you can see which music you did buy, but is not yet downloaded on your device. 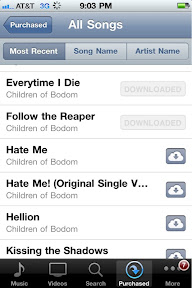 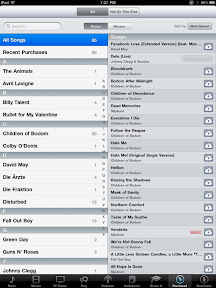 As we learned, iCloud makes you to download the songs instead of just accessing them to play.
The listing is great, you see your total songs purchased and by artists or albums. But with this, the nice part stops. You can not download all songs with one click. You need select song by song. I was hoping I could select multiple by artist by just swiping the artist name etc.
Audible books and movies don't work with iCloud at all, which is more important for me than songs. I imagine, if we can sync our iPad over air, it might be not a big deal. Today it takes forever to get your selected movies on your iPad and half of the time it does not work. Same with books. I have to go to my computer, connect the cable, choose the movies and songs and hit sync. But then it tales forever because I need first to update from the phone to the computer to make sure all apps songs etc are in sync. To get just one movie to my iAd takes almost an hour, what a waste of time.

Apps are now in the cloud as well. As Steve said you buy once an app and then you can install it on every device. 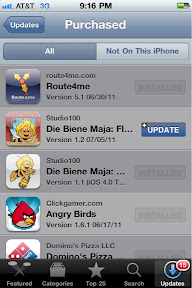 But there are a few drawbacks.

First of all on the iPhone all apps are in one list, no way to group them by category etc. Over the past 3 years I downloaded over 400 apps, it would take forever to find which one I want to have on the other device. Plus there is no real indicator if the app is build for iPhone and iPad, there is no need for me to run iPhone native apps on the iPad. I don't like the magnifier function at all.
Never understood why text is not scalable and get blur when double the size. Text is not graphic it is usually vector and should scale easily. 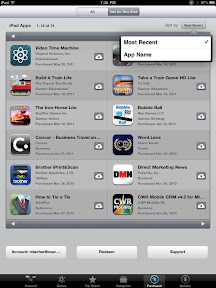 Under settings you can decide to make apps, books or song instantly available when purchased on other device, but I would not recommend. 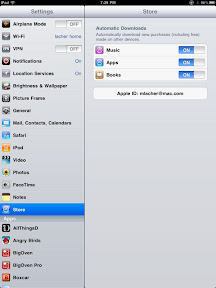 ICloud does not work as i would expect, it seems as faulty like mobile.me. As an example if you download a game like Angry Birds on your iPad which was prior purchased on the iPhone, I would have expected it recognized your latest score from the iPhone, because the game is a part of the game center. In my case, on the iPad, I had to start from the beginning again even if game center greeted me with Welcome back. Maybe it is a game developer issue and not Apple but on the other hand Apple should solve this without even bothering the developers.

And then comes the old problem we all had with mobile.me. syncing of contacts and appointments etc never worked well that we had suddenly duplicates. ICloud with apps seem to be buggy too. When I now download updates of apps I get every time per app a popup window that i downloaded and purchased the app before. This is extremely annoying.

I tested to download 80 songs and 17 apps updates at the same time via 3G. My phone basically did freeze, could not do anything and I reached after a short time even my download limit. There was no warning that 3G will slow the iPhone and that downloading will exceed your monthly data limit. With Wifi it went pretty fast however for some reason it could not download multiple files at the same time like good download software on the Mac does. This means the iPad did download first the 80 songs, song by song and then the apps. The downloads even stopped when I got a call, which is weird hence the call was over voice and not wifi.

I hope that a lot of things will be better when iCloud finally get released. Otherwise is will be a joke like mobile.me just more fancy.