I got extra early up on Wednesday to download and install the new Lion OS On my iMac. Unfortunately it was not yet available at 4:00am. I had to wait a whole day till I was back from my office. The install was pretty straight forward. You go on your iMac to the app store click on download and voila. The OS is 4GB and can take a while to download. It took with my slow Internet connection a little more than 1.5 hours.

After it is done you start install and then it takes (depending on the computer) another 30 minutes to install. At the end the computer reboots and your done (almost). After restart your Mac will inform you that it deleted some of your not compatible applications. In my case it was mostly CS3. Because these old Adobe apps were written for PowerPc and used Rosetta to run on MacOS X.

I had in total 20 programs which showed me that on one hand I could use 10 years same apps and on the other that I was too cheap to buy new versions over the years.

It will take a while to open mail, when you run mail the first time after the upgrade. Because it gets completely changed and I have thousands of emails in mail. It took 20 minutes with my mail to be converted. But the new mail is very slick.

After all, my computer did seem very slow after upgrade, till I figured out that my OS started indexing for faster search. Because Lion is not an update but a full new install of OS the old indexing does not work.
Indexing is done and speed is fine.

I think, I never saw such easy install of an OS, I would had preferred if the installer would have told me before installing OS which program will not work after the upgrade, that I could decide to postpone the install. But I guess not many people have such old apps like me. But if you have a design studio am you run CS3 then you are out of luck, you must get at least CS4.

There were already thousands of positive ratings for Lion when I downloaded it, even if i did it on the first available day. This is crazy. 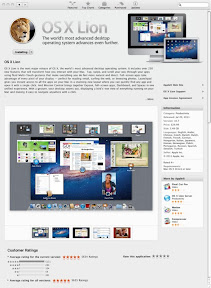 I don't want to go into all new functions and behaviors, because I am sure there are many blogs writing about it. But what is really clear, is, that the new OS has a lot of similarity to iOS. It is now having iPad with two 27inchs.

I like it and Apple did a very smart move. There are over 20 million iPad users and 100 million iPhone owners. Many of them are kids. And Apple is building on Kids. If their first computer is an iPad they might want then an iMac or MacBook Pro when it is time for a new bigger computer.
Anybody who never had a PC but an iPad, can instantly use the Mac computer, if Lion is running on it. There are no scrollbars anymore, all is multiple touch like on the iPad. You have a screen to see all your apps arranged as square icons like on the iOS etc. It is iOS on steroids.

Microsoft did miss to attract young people, they thought the first computer will be at work and then the people will buy a private computer. Which was true 20 years ago, but not anymore. Today we have computers as young as 3 years (my son has no computer but he knows how to use the iPad and he is 3). In his private live he will most likely never have a Windows PC. When he starts to work he will expect an Apple computer or might be lost the first few weeks because of a different OS.

Google does lead the mobile smart phone market with Android, but in tablets still behind (Apple has still 79% market share). And there is not yet a good Android OS for computers.

Apple did it right again. But to warm you. You will have some problems with Lion if you used a lot the previous OS. The handling is totally different (as I said like iOS).

And they moved a lot of things around. To see now how much space is available on your hard drive you need to go to info, it is not showing anymore in the window, maybe there is a setting but I did mot find it.

I talked with a bunch of people and followed twitter, I heard almost only good things about the new OS, but everybody says that they need to get used to how to resize and scroll in windows.

I can see that in a few years iOS and MacOs are one OS.

Apple did a nice job with new OS and if your computer is not too old then buy it, it OS just $29.99 which is pretty cheap. And I bet because of the low price and the easy install it will be the fastest upgrade of OS ever, if there are no big bugs within the system.

You can go to any Apple store and download there or get it from HD installed for free if your home Internet is too slow. Apple knows what service is.


BTW
I was disappointed I got the notification email from Apple on Wednesday night 6 hours after I installed Lion. They should work on their email marketing.