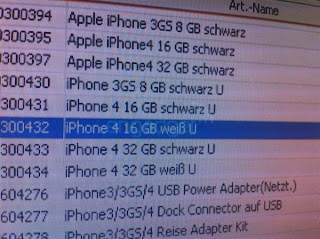 Interesting is that if Apple does not want to announce to early the arrival why do they already deliver to BestBuy or Vodafone the real Name of the SKUs. They should know that at least one employee at these stores would make a picture and send it around the world, and i bet the person would use an iPhone to make the picture. Would it not make more sense to have a code name in the inventory list and replace the code name when the phone is announced?

Or is it again a smart marketing trick? Don't tell anybody about the white iPhone but put enough clues out there that everybody starts to speculate. This approach is the best and cheapest marketing you can do. No need to run expensive ads and press releases. This way things get viral better than a marketing specialist could imagine.

I belive nothing happens by accident, and therefore Apple does know exactly what they are doing and if people post some "secrets" then they are strategic placed from Apple.
Posted by Markus at 8:00 AM