Twitter did raise a short while ago $200 million and is now valued almost $4 Billion.
At the same time they generated last year less than $100 million. I really don't understand why we are almost back at the same situation before the big .com bubble exploded. Companies like twitter and Facebook get evaluated by their maybe potential revenue and not by their real market value.

Let us face this, i have no doubt that a Facebook could eventual generate $50 billion in revenue or that a twitter is able get revenue of $4 billion, but this will or would take time. For both at least 5 years if they grow revenue 100% consecutive in the next 5 years. But 5 years is a long time and can change a lot.
Twitter CEO Dick Costolo revealed he believes twitter will solely be funded by advertisement. Advertisement is attractive, but dangerous. Brands can only advertise as much they have money for it but the money is not unlimited. Right now twitter and Facebook are in favor for brands because it is new and we don't really know how much brand awareness and revenue it will bring to the brands. Advertising is only good as long it can produce indirect or direct sales.
We don't know if twitter is still attractive for them in 5 years, but we still bet twitter will be $4 billion big in 5 years.

Google could grow so much because the Internet grow a lot and we needed a place where we can find the information we are looking for. Google offered us the best solution and therefore their ad model did work. Facebook might work, because after almost 10 years of google we consumer understood that the ads shown on google might not help us all the time to make buying decision. But on Facebook the advertisers know who we are and what we want, brands can finally tailor personalized ads. But what if the government decides that brands are not allow to know so much about us? The prices for Facebook ads will fall, extremely. Facebook would be not so much in favor than other portals or search engines.

Let us compare Facebook to Google. Google made approx. In 2010 $25 billion in revenue and has a market cap of $200 billion. And Google is traded public. Facebook had a revenue of $2 billion last year and is valued as $50 Billion only traded at second markets. This means Facebook has 3 times better revenue - market cap ratio than Google (Google: revenue times 8, Facebook: revenue times 25). But in terms of traffic which defines at the end amount of ad revenue (when same amount of impressions) they are almost the same. So why is Facebook so higher valued? Brands, banks and consumer did need after ten years something new, something special. Google is old, it is an elephant, not so sexy anymore. The founders are older. Facebook is young, Mark is young, it is sexy, it is somehow new. It is a young playful elephant with dreams. The Google dream was "don't be evil", now Google is mature and understand that dreams not always come true. Facebook is still dreaming to make the world better. But this dream will not come true neither, because of our rights of privacy.
Note on the side:
privacy is exactly the reason why Facebook fas in Japan only 2 Million members. People in Japan don't like to open their identity just to do things in the Internet. I like it, more of us should think like them.

however Facebook will get eventual mature and a new kid is around we want to be around. Facebook will survive and will be used by more than 500,000,000 users this won't really change, because it is over the critical mass, but it will be so common that advertisement money will go away to the new rising star.
Twitter will not be one of them.

But back to twitter, it is for me really unlikely that twitter can ever make more than $500 million in revenue. Yes a lot of people are using twitter but not many do read tweets direct at twitter. Either we use a twitter app or read the tweets on other portals like linkedin. And even if there are a lot of ads, do we really want to see or even click on it?

Here is my tip to twitter, how they can make billions in revenue. Twitter should buy or start their own search engine, not the twitter search we have today. A simple page like google. I know that many people not only tweet their thoughts in 140 characters but many times as well add tiny urls with links to full articles or blogs. Twitter as well reflects more than anything else our moments of life. Which could help a lot to decide which stocks to buy, which bars and nightclubs are in or who the hottest single at high school is. Twitter just needs to find a way to harvest this for us in an intellectual search engine.
If twitter can spin off a search engine as life saver for certain situations and as a helper to find good blogs or news, then i can see value in twitter. But for now the twitter search is poor and i don't believe very well used.

Investors, either you guys do know much more than simple people like me or you just like to gamble at high stake. I would no invest $200 million in twitter right now with the knowledge i have. But i guess I know much less details than the investors.

A good friend of mine would simply say:
"Facebook, groupon and twitter investment. This shows us how less the money is worth nowadays." he might be so right.

Below is article from the Australian I did read about twitter and it's advertisement future.

Twitter chief executive officer Dick Costolo. Picture by AFP Source: AFP
TWITTER aims to become an independent company funded solely through advertising, but has not yet considered flotation, the CEO has revealed. 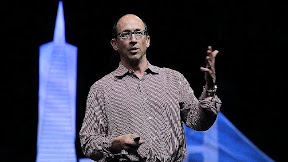 Dick Costolo said that Twitter's services for advertisers were enough to create a profitable business model. These include "promoted tweets", where companies pay for their messages to appear when a user searches for key words.

The remarks were the clearest indication yet that the company's strategy is to aim for a lucrative listing of shares rather than sell itself to a larger company.

Google and Yahoo! are believed to have considered bids.

"Our business model is an advertising model," Mr Costolo said.

"My sincere hope is for Twitter to become an independent company."

However, he said that the company had not yet considered a flotation, suggesting it was unlikely it would do so in the foreseeable future.


He joked that Twitter's business plan was "to continue to raise money".

"I don't think about (flotation) on a day-to-day basis. I'm sure there will be a time when we consider it, we're just not there yet."

Companies such as Starbucks, Virgin America and BestBuy have already signed up to its promoted tweets service.

Mr Costolo said that the medium was proving increasingly attractive to brands wanting to speak directly to consumers.

Twitter was valued at $US3.7 billion ($3.72bn) last month, four years after it carried its first 140-character posting.

The valuation came after the company raise $US200 million in its latest round of fundraising, an investment led by Kleiner Perkins Caufield & Byers, one of Silicon Valley's best-known venture capitalists, which saw off competition from DST Global, the Russian investor in Facebook.

The fundraising round took the total amount raised by Twitter since its launch to about $US360m.Analysts believe that Twitter attracted less than $US100m of advertising revenues last year, plus fees from Google and Microsoft in return for allowing tweets to appear on their search engines.

At the time one analyst said: "It's a huge multiple, but the idea is that (Twitter's) scale can be monetised."