Is it a phone or a netbook?

Motorola once the the dominator with phones like the Razr lost the cool factor market lead against the iPhone and companies like HTC with Androids.

But Motorola is back. According to Motorola they have now the most powerful phone - the Atrix!!!

What is so special with the Atrix?
It is the first phone with a dual processor 2x1 gigahertz) which is twice then the current phones on the market have (1 single gigahertz processor).

But more impressive then the dual processor is the ability to dock the Atrix into a 11.6 inch screen with keyboard and a fingerprint scanner to unlock the phone (number code works as well in case your finger gets cut off) 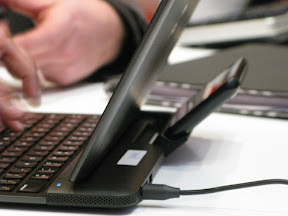 According to some rumors the screen docking will be sold at Best Buy and not ATT (ATT will sell the Atrix phone). The prize will be at $150 for the 11.6 inch docking screen. The Atrix becomes a netbook that is just 14 millimeters thick when plugged into screen and keyboard — about the same as an iPhone with a bumper. The keyboard has its own power source and is rated at up to eight hours use. The netbook has USB slots so you can use an external drive.

Is this not what we all wanted? A phone we use to go to work or to make calls. But when we are in the office we dock it into a screen and use it as a notebook.

The idea is great but the Atrix is still a little away from this.

1. It s running on Android 2.2 and there are not many enterprise application available. But at least you can use google documents for Word and Excel.
2. When the phone is docked, the 11.6 inch screen only support right now chrome browser in full screen mode. All other applications are shown in a small side box on the screen which is the same size as the phone screen.

But after all it is the right direction where phones will go.
The Atrix is impressive in speed, and quality.
Some facts:
16GB internal memory and up to 32GB micro SD card makes it in total 48GB
5 Mega Pixel back camera and a VGA front facing Camera
960x540 screen resolution slightly lower than the iPhone 960x640 but it is not as clear and bright like the iPhone.
The Atrix will be on ATT 4G network
1 Gigabyte RAM which is more than other smart phones.
Basically the Atrix is similar like a netbook in terms of specs 18 months ago but much smaller.
Motorola is claiming that the phone will only use both processors when needed.

It is exciting to see the Atrix in action and it is pointing in the correct direction but it is still not a notebook replacement. We will see what Apple will show with their next iPhone release after iPhone 5.