As soon Apple released the iOS update a friend of mine started to update his iphone. iTunes prompted him that the new update is available. He made the necessary step to backup. After the backup the upgrade was suddenly not available anymore. iTunes was showing that his phone is up to date. This was enough info for me to wait till I am at home. I guess they released and then they took it back.
Later the day at home I started my process. The first backup took just 20 minutes. I started the update process and it promoted me again for backup. The backup started and took his time. Exactly 4 hours, I have no clue why it took so long. Finally the OS was installed.
This morning I started to play around and looked at the new features. Mail obviously changed a lot; you see your mail boxes and accounts which is funny wise for me the same. But nice is really to see all emails in one folder (called all mail boxes).
Accounts have little icons to show what kind of account it is, either mobile me,  imap, or exchange. This is nice. 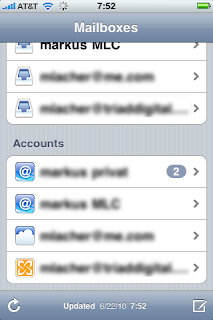 The next thing I started was to move apps into folders. I have 83 application installed and it took forever. Moving apps through screens is very hard, especially when you have a cover on the iphone. I had had to take the cover off that I could easier move apps to the border of the screen to get it in another screen.
Finally after 1 hour all applications were in their folders. When it creates folder it takes the category name of the application, which goes over the first app to build the folder, but you can easily change the name of the folder. I could reduce my 11 screens down to 3 screens. 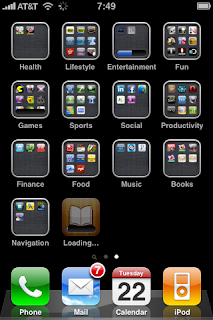 My camera captured now the location, but I am not able to zoom. I guess it only works with the 3Gs, which has a higher resolution.
Multi tasking is of course not working, as announced form Apple.
Next I went ahead and downloaded ibook. But before I could do this I had to agree the new Terms and conditions. IT took a while till this worked; it always jumped out of app store and back in without displaying the new terms to agree on. Finally it worked. The new terms are 45 pages . The first part on the first page notifies that now all apps are location based.
TERMS OF SALE

Purchases or rentals (as applicable) from the iTunes Store are available to you only in the United States, its territories, and possessions, and are not available in any other location. You agree not to use or attempt to use the iTunes Store from outside of the available territory. Apple may use technologies to verify such compliance.
I can’t download German application anymore, which is bad, because I live in the states but I am German; therefore I need some German applications.  Apple changed this because in Europe the laws are different especially about adult content. Now Germany is able to have bild.de as application, which has a lot of naked women. This is just normal in Germany; even in day TV commercials there are some naked women or men (when they take a shower etc.). Unfortunately when you download a new application it does not go automatically in folder, which could have worked by looking at the category name, and compare it with folder name/ content.
I don’t know if it because of new OS, a lot of traffic at apple store or bad internet connection but downloading seems to take much longer than before.
I have ibook with my ipad which is pretty fast, but not with the iphone 3G. It takes almost 30 seconds to load. When starting ibooks the first time it ask you to sync your bookmarks and books across devices, which I did. 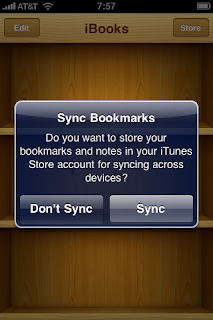 But I did not see any of my books, I guess I have to do some extra settings, which I did not find yet. Both devices are using same account access, it should have worked. Finally I found how to do it. I had to go to purchases and download them again. I have a lot of books and I could only re-download one by one. 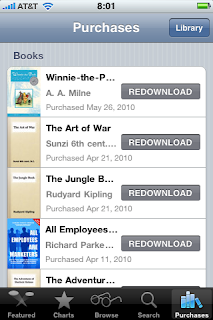 Otherwise all my bookmarks and the page have been the last time visited worked.
Surely there are more features, which I will encounter soon or later.
Overall the changes are nice but my phone seems to be much slower than before. I would not yet recommend to upgrade to iOS 4.0 if you have only a 3G iphone (not the 3Gs)
Posted by Markus at 8:18 AM