Give me a break. Please come up with an idea to allow people to blog what they want but limit it to 240 characters to make it easy for them to blog. Allow them or others who don't blog to follow anybody they want.
Read in two limes of text why Tiger Woods can't grow a full beard or when Lady Gaga goes to bed. And please make it easy to allow people just to blog links to others people websites.
As a result you get 100 million users blogging something with or no sense, and gives everybody news what we are the whole day doing, because we all want to know it.
You get so much content that you can just print it in a big book and sell it as a bestseller. Even the national library will try to archive your data to keep something for the future. But don't worry too much if your servers are down or not as long you have a cute bird on the page when the DBs are down. 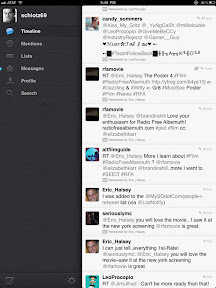 Then you like twitter and you like to be a part of something we never would have known we need it.
I admit i tweet, i admit i don't know why, i guess only because i was told i have to, to be a real social expert.
But it does not matter, it must be good because twitter is valued high.

Twitter is in the process of raising a huge new round of financing that would value the company at a whopping $4 billion, according to TechCrunch.
Venture capital firm Kleiner Perkins is said to have submitted the most lucrative investment offer in the reportedly "intense" bidding, topping an offer from Russian firm DST that would have valued Twitter at about $3 billion.
The figure marks a huge leap from the social-media site's last valuation in early 2009. At that time, Twitter raised $35 million at a reported $250 million valuation.
It also demonstrates astronomical growth for a company that was founded less than five years ago and doesn't have a proven business model or, presumably, any profits to speak of.
The valuation would make it worth four times that of such entertainment-based companies as Lionsgate, TiVo and World Wrestling Entertainment.
The news comes two months after Evan Williams' decision to step down from his CEO post to focus on product strategy. COO Dick Costolo, a former Google executive, took over the CEO reins of the company.

I feel like in a time machine back in 1999 when we did hear every week about new deals of big investments in companies who spend more money than getting in.

I believe we are only 30 months away from a big social break down . 50,000 people will lose their job at end of 2012 because we figured out that social is cool but cool enough to justify Billions of investment.
The social boom will be over. A handful will survive and many new will come after the breakdown, but none of the new ones will get so much money anymore.

I think is is ok to have twitter and I like the idea, but i don't see a value of $4 billion for them. I can't see that twitter will make enough revenue to justify the value. The only thing I can imagine is to analyze the data to learn who the users are and what they are doing and what they like or don't like. This would be awesome, but i doubt it would really possible. At least not now.

My tip:
You want to get rich? Start a social company right now and sell it in 12 months before it is too late.