Kickstarter - not sure what i should think about

I recently blogged about kickstarter.com how cool it is and how a project can be extreme successful. The best example is TikTok+LunaTik Multi-Touch Watch Kits by Scott Wilson which got almost a million dollar to help getting their iPod nano wristband started.
I thought kickstarter is great a good social portal to get my long term project idea started.

I have since 7 years the idea to make a cinema movie which is totally done through crowd sourcing.

A friend of mine and I did write a criminal story and script and the idea is that anybody in the world can sign up to tape one of the 120 scenes. The crowd will decide which submission of each scene is the best. At the end we take the 120 best submission and cut them together. The actors in the movie as well the locations will be always different but similar because we would describe how the characters would look like or have to wear. However the fun part is that the characters are every minute are slightly different and taped from all over the world. To make it for the audience easier we would (during cutting) replace the voices that the same characters will always have same voice regardless who the actor is.

A film project never happens before and for sure a candidate for Cannes.
We never executed because we had no funding. Kickstarter is the best place to get it started, I thought.

I applied with my project at kickstarter, which requires to explain what the project is, what people will get if they are going to be backers. Plus you have to provide some links (text is not so much wanted) which shows who you are. So i submitted the link to my blog, to my linkedin profile, my Facebook page and twitter and to my website I once created for the movie idea. After a few days I got an email from kickstarter which was already weird ( but I guess because of my bad written English):
Cassie commented on your Kickstarter submission:

Thanks for writing! Project creation currently requires a US bank account and address. Do you have both? Let me know!

I answered that i might sound weird but i live in the US and i have multiple American bank accounts.

It took another few days till I got another email from kickstarter:

Cassie commented on your Kickstarter submission:

Thanks for getting back to me, Markus! Kickstarter is not a source of funds on its own -- its a tool for turning your already existing network of friends, fans, and family members into patrons. Keep in mind that our platform is also built on an all-or-nothing funding model. If you do not meet your funding goal by your project end date, no backers will be charged and everybody walks away.

With this in mind, can you tell me a little bit about your plan for spreading the word about your project? How are you anticipating to turn your network into backers?

Let me know your thoughts!

----
Here I stopped because i got upset. I wrote in my application that i will use Facebook, linkedin and other social network to promote my idea and still it was not enough.

They even told my in call that kickstarter is for project and not product funding. Which is true and shown on their website. 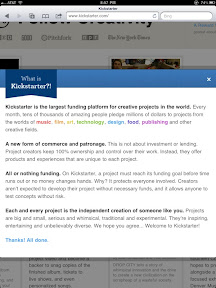 I thought my idea is a typical project. It has a start date and an end date.
As great the idea of the iPod nano watch is, this project should have been not on kickstarter. It is clearly not a project, it is promoting a product. You can buy their wrist band from their website in a few weeks. But somehow it got on kickstarter, but somebody like me with a great idea for a real one time project seems not to be able to be on kickstarter.

Eventually my crowd sourcing movie idea will never happen, and the world will never know what great movie they are missing, thanks to kickstarter.

For all who wants to use kickstarter. Use a project which kickstarter employee can understand don't try to have something these people need to think and use their brain (sorry for these strong words). Use something which is mainstream or against mainstream (like Diaspora), or be just already famous in what you are doing.

Kickstarter is growing and has many projects but I am starting to question kickstarter.

I will answer Cassie and hopefully kickstarter will let me start my project, but right now I need distance, because i am disappointed. I think it is great that they look into each project but please don't talk to me like I am 4 years old. Take your time and read my CV and you will see my English might suck but at least I have 3 degrees and can speak 4 languages. Cassie what is your profession? And how many languages do you speak?

Email ThisBlogThis!Share to TwitterShare to FacebookShare to Pinterest
Labels: kickstarter