Adobe did so much complaining about Apple not allowing flash on their mobile devices. But instead they should develop a tool to allow to build rich content without flash. They missed it and now Apple released a tool which can just do this. Right now it is an iAd producer tool, not too much functions but has a big potential to be much more than an ad creation program.

I believe if this takes off, then we will see this tool soon outside of the apple developer program as a real alternative to Flash.

Courtesy of the appleinsider.com:

Apple has released iAd Producer, a new tool for designing interactive "rich media ads" using web standards for distribution through its iAd network within iOS apps, in a direct blow to Adobe's Flash developer tools, the current standard among many web and mobile ad designers.

Apple's new HTML5 development tool graphically lays out the structure and flow of iAd elements within an iOS advertisement in a "powerful visual editing canvas," the company states in its announcement aimed at developers.

The new tool incorporates a variety of technologies from Xcode, Apple's Integrated Development Environment for Mac and iOS software. 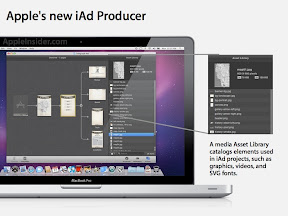 At the introduction of Xcode 4 this summer, AppleInsider projected that the company's increasingly sophisticated, graphical software development tool could portend new HTML5 development tools, specifically noting that "one example of how the company's significant investments in creating Xcode 4 could be applied is in shipping a web development tool aimed at creating HTML5 content for the web and for use within web-based tools such as Apple's iAd mobile advertising program."

iAd Producer also enables developers to easily add animated transitions and effects to their artwork and pages, and catalogs media assets used in iAd projects, such as graphics, videos, and SVG fonts. The resulting content acts as a self-contained HTML5 website that can be inserted into existing iOS apps to present an interactive advertising experience.

iAd Producer also incorporates JavaScript debugging tools similar to those found in Xcode, in addition to validation checking that identifies common errors and "sure that your iAd content is ready for prime time before you submit it to the iAd Network." 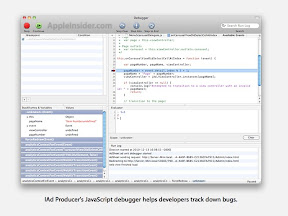 Apple has been rapidly expanding its iAd program after acquiring Quattro Wireless less than a year ago and converting its conventional mobile ad banner network into the immersive, app-embedded iAd experience.

Apple previously had no real experience in advertising, but recognized the need for ads to help support mobile software titles. The company's chief executive Steve Jobs said that existing mobile ads, like those served by Quattro and Google's AdMob, "suck," and the iAd would enable brands to deliver high quality, valuable experiences that customers would find interesting, useful, and non-intrusive because they don't dump users out of their existing app and into the external web browser after being clicked.

Jobs described iAds as using standards-based HTML5 content exclusively, rather than delivering proprietary binaries created by web-alternatives such as Flash or Microsoft's Silverlight.

Apple's efforts to push mobile content back to using web standards--leveraged by its powerful position in smartphones, tablets and media players, has prompted Adobe to refocus efforts on delivering HTML5 tools and has forced Microsoft to dramatically scale back its plans for Silverlight and instead focus on delivering HTML5 compliance in future versions of its Internet Explorer browser.

Web content distributors, including Google's YouTube, Vimeo, Brightcove, and even pornographer Digital Playground have all taken steps to support HTML5, joined by a variety of web developers and services (ranging from Virgin America to Scribd) that also want to reach iOS devices.
return to previous page