I Am Rich, the controversial iPhone app from 2008 is back. You might remember the $999 app which did nothing then telling people you paid $999 for nothing.
Bow the app is back but this time for Windows 7 phones and for only $499 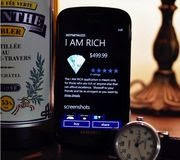 The I Am Rich app lasted just a week in the Apple App Store before Apple cottoned on to the scheme and pulled the app, but not before eight people reportedly bought the app that did nothing.
Eight downloads for van app which takes 5 minutes to create means that this app was one of the best margins in the app store.

Now two years later, the same developer is trying the same trick on Windows Phone 7 owners looking to prove something.

Email ThisBlogThis!Share to TwitterShare to FacebookShare to Pinterest
Labels: i am rich, iphone, windows 7 phone