There are lot of dates floating in the internet about the next iPhone release. All we know is that iPhone will be released with iOS 5.0 which is still in beta testing.

Some are saying the iPhone will be announced end of September 2011 and available in store October 7th.

However a few people told me that their apple stores are closed (since yesterday) and covered in black that nobody can look into the stores. On the black curtain is printed that the store will reopen September 19th.
The photo below is from Salt Lake City. 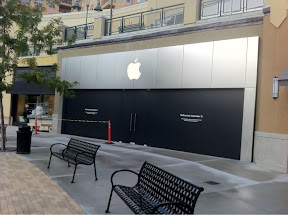 I had no chance to go to our store in Tampa and did not find anything in the Internet regarding closed stores. However I got an email from Germany that the Apple store in Munich is closed too with same message. I could not very this neither.

But there is another Apple Store closed (on St. James Place in Suburban Square), scheduled to re-open Monday (Sept. 19).
“They are doing renovations—some work to the entryway,” said Mark Bachus, the shopping center’s general manager.
(Source Thomas J. Walsh) 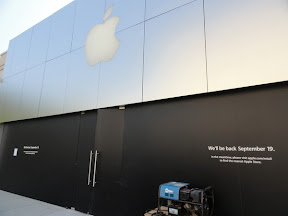 Maybe Apple is changing the concept of their smaller stores or all stores will do some renovations or redecorating but the big ones only in the night of the 18th.

Closing all store for a week would cost too much money and image.

We will see what the real reason is for having some stores closed and reopen at the 19th. I would not wonder if one store is closed for renovation. But multiple stores at the same time and same day for reopen is suspicious.

There are only two explanations, either Apple will release something new on September 19th or Apple does renovate all stores for a new look and feel and does it very coordinated with 10 stores at the same time. As we know it can't be coincidence, because nothing at Apple is random.

For all Apple lovers. Let us believe the 19th will bring us a new iPhone or another amazing, unbelievable, never seen before Apple product (60 inch Apple TV with Retina display and replaceable computer module to easier upgrade?)