At some point most of us would like to be a Mark Zuckerberg, Steve Jobs or Larry Page - Famous and rich and a part of our history. So do I.

Therefore I decided, it is time to do something which makes me rich and unforgettable. I decided to build an app.

The question is what the desired platform should be.

Let us start with a mobile app for Android OS. The SDK is free to download. There is a one-time $25 fee for registering to distribute apps on the Market:
http://market.android.com/support/bin/answer.py?answer=113468&topic=15866
This seems to be right I can (with almost no costs) get an app into the android market. But I can't sell an app over $200 at Android market place.

If I want to use google cloud to develop my app, because I don't want to buy hardware for testing and developing, then the costs go up. 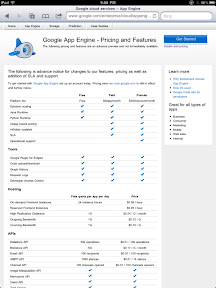 But of course I would save a lot of money for hardware and resources. But using the full service costs $500 and more a month.
Developing apps on Google App Engine takes one-fourth to one-tenth of the resources and one-fourth of the time compared to building something ourselves.”
Gary Koelling, Director of Emerging Platforms, Best Buy

Pricing seems alright but the big issue is the big chaos of different OS versions and devices available on the market. Google is not regulating very strong their OS distribution and is not telling the vendors what hardware to use. To develop an android app which should reach 90% of Android users must be tested on over 200 android devices. Ouch. There is no chance to build a professional enterprise app because the max sell price is too low and the testing to expensive.

May 2011:
Android activations swelling to over 100 million worldwide (112 countries) on 215 carriers and 36 manufacturers with 310 different Android devices


Developing an Android app might not cost a lot for licenses nor does Google take a lot for having an app in their store, but I am not willing to hire 20 testers to to test my app nor do I want to develop years to get my app running on all android devices.

Quote Netflix:
Because the platform has evolved so rapidly, there are some significant challenges associated with developing a streaming video application for this ecosystem. One of these challenges is the lack of standard streaming playback features that the Netflix application can use to gain broad penetration across all available Android phones. In the absence of standardization, we have to test each individual handset and launch only on those that can support playback. We are aggressively qualifying phones and look forward to expanding the list of phones on which the Netflix app will be supported.

Maybe I should try Apple.
As we know there are only a handful devices we need to support and would still reach 100 million users. The iOS is running only on the iPhone, iPod touch and iPad. Each of them have only a few versions in hardware and not many iOS in the market. 84% of iOS users are already on iOS 4.
The iPod touch has same screen size as the iPhone. These all sounds reasonable for me for developing an app. I can easily afford to by from each one device and would not spend more than $1,000 (phone contract not included). Apple allows to sell apps over $200. I have seen a few for $999 (there are 20). However the store is so full that it is almost not possible to create an app which not somebody else already did.
Total Apps Approved for US App Store: 589,391
Total Active Apps (currently available for download): 471,319
Total Inactive Apps (no longer available for download): 118,072
Number of Active Publishers in the US App Store: 106,423


Getting access to developer tools is inexpensive as well between $99 and $299 a year. 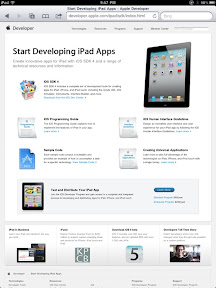 But there are some issues.
Apple has very strict guidelines how to develop an app. An app can be denied because the developer does not follow the guidelines.
An other issue is, that Apple will take 30% of each sale of an app. This can be very cost intensive. I was thinking about an enterprise app, which I want to sell 40,000 times for $23.99. This is $287,780 for Apple just because I use their app store. Yes I get maybe free promotion and the user does know where to go to find my app, but this a lot of money. I could build an app outside of the app store and publish it only for my enterprise clients, which Apple allows, but I might still pay 30% when Apple find out that I sold the app outside of the store. Apple allows corporations to develop apps which are not the app store, but only for internal use and not for sale of the app.
And then Apple is heavily promoting the iPad and iPhone as a game computer and not as business computer. 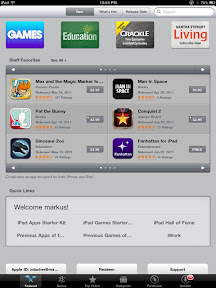 I don't want to get rich and make Steve Jobs richer.


As alternative I could develop software for Windows. There are of course many different hardwares to consider, but if I build a web based app with .Net then I could concentrate on 4 browsers (IE, Chrome, Google and Safari) to get most of the users a working app. 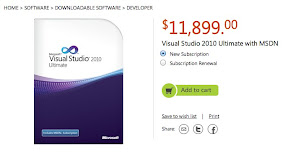 The investment would be $11.899 for Visual Studio ultimate with MSDN which gives a lot of developing tools 78 Microsoft products like office etc and $3,500 worth of Microsoft Azure cloud. 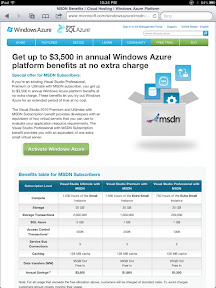 This is a lot of money for a startup, but cheaper than Apple in the long run, if I sell more than $35k a year in software.

Interesting is that the same package cost in Germany almost the double $20,900) 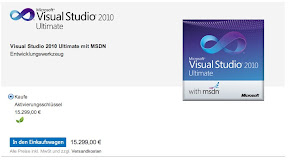 This is as much as two Fiat Panda cars.

The last alternative would be the amazon app store.
The Amazon marketplace has considerably less competition than Android store or the Apple app store, I actually might have better results there.
Just make sure that if you agree to be the Free App of the Day, you completely understand what you’re getting yourself into.

Anyway, Amazon has gone ahead and sweetened the deal just a bit: beginning September 2011, anyone who submits an app to the Amazon App Store store will get a free chunk of change to check out the Amazon Web Services suite (amazon cloud).

But apparently Apple isn’t the only company running an App Store with a penchant for secrecy.

In a blog post in August, mobile developer Shifty Jelly has publicly called out Amazon for covertly offering the company featured placement on its unofficial Android Appstore as the ‘free app of the day’. This is a well-known promotion that Amazon has openly talked about, but there’s a twist: instead of paying developers 20% of the app’s List Price, which is what it had previously promised, Amazon is asking them to take a 0% rev share.
People were very clearly told that even if Amazon decided to make an app free, developers would still be making 20% of their list price. In other words, they’d still make money. But not anymore as seen above. This means my $23.99 app which might have downloaded on the free day 20,000 times would cost me not 80% of my potential revenue but all.

I learned that developing an app is more than just being a developer. It is important to choose the right platform.

During my research I learned something really interesting. For PCs, everybody is talking about software. But for mobile devices and OS any kind, we only talk about app. I wonder what is the different between software and application.

After all I decided not to build an app to be as famous as Steve Jobs and that I am going to brew my beer and to sell it to restaurants by delivering it with one of my two new Fiat Panda.